Son of God.. The Great Indian Sage and Seer... Shri Ram Sharma Acharaya.- he is a lighting the spiritual path. 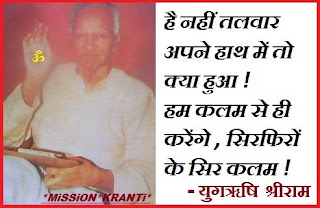 Shri Ram Sharma was a Indian sage and seer. He pioneered the revival of spirituality. He was a pious of Gayatri Mata and great student of Dada Guru shri Sarweshwra Nand. He was integrated the modern and ancient science and religion. Pandit Shriram Sharma was great devotee of Goddess Gayatri. He was master in the highest kind of Gayatri Shadana and Tantra which is described in Vedas and Hinduism. He gave simple shadhana method which could be easily pursued by the common person.

Birth
Shriram Sharma Acharya was born on the 20th September 1911 as the son of  Pandit Roopkishore Sharma and Dankunvari Devi in Anvalkhera, dist. Agra, India.

The Establishment of Shantikunj
He was a founder of the All World Gayatri Priwar, Which has its headquarters at Shantikunj Haridwar, India; Established in 1971.  Shantikunj initiated and guided by pandit  Shriram Sharma Acharya ji’s vision, has grown into a sovereign university. The unique spiritual austere abode, from where the great Gayatri moment was launched by Pandit Shriram Sharma Acharya ji. The Place has had considerable growth and development with a wide range of followers given to the powerful austere pursuit of Gayatri, including meditation, havan, Mantra chatting.

Last moment
The great sage lived an ideal life for 80 years and voluntarily shed his physical sheath on Gayatri Jayantri-2nd June, 1990 at Haridwar.

Authored
He authored more than 3000 inspiring literature. He explains the philosophy of Upanishads and created new Puranas and Pyagaya Purana.

Note: This post shared here are base on my Knowledge in case you find anything wrong and missing points than please bring it to my notice.